Jane Jacobs (1916-2006) was an urbanist and activist whose writings championed a community-based approach to city building. She had no formal training as a planner, and yet her 1961 treatise, The Death and Life of Great American Cities, introduced ground-breaking ideas about how cities function, evolve, and fail that have become commonsense cannon for today’s architects, planners, policymakers, activists, and other city builders.

Jacobs saw cities as dynamic, complex ecosystems with their own logic and order. With a keen eye for detail, she wrote eloquently about sidewalks, parks, design, and self-organization. She advocated for higher density in cities, short blocks, local economies, and mixed use zoning. Jacobs helped derail the car-centered approach to urban planning in both New York and Toronto and invigorated neighbourhood activism by helping to stop the expansion of expressways and roads. She lived in Greenwich Village until 1968, when she moved to Toronto and continued her work and writing on urbanism, economics, and social issues until her death in April 2006. 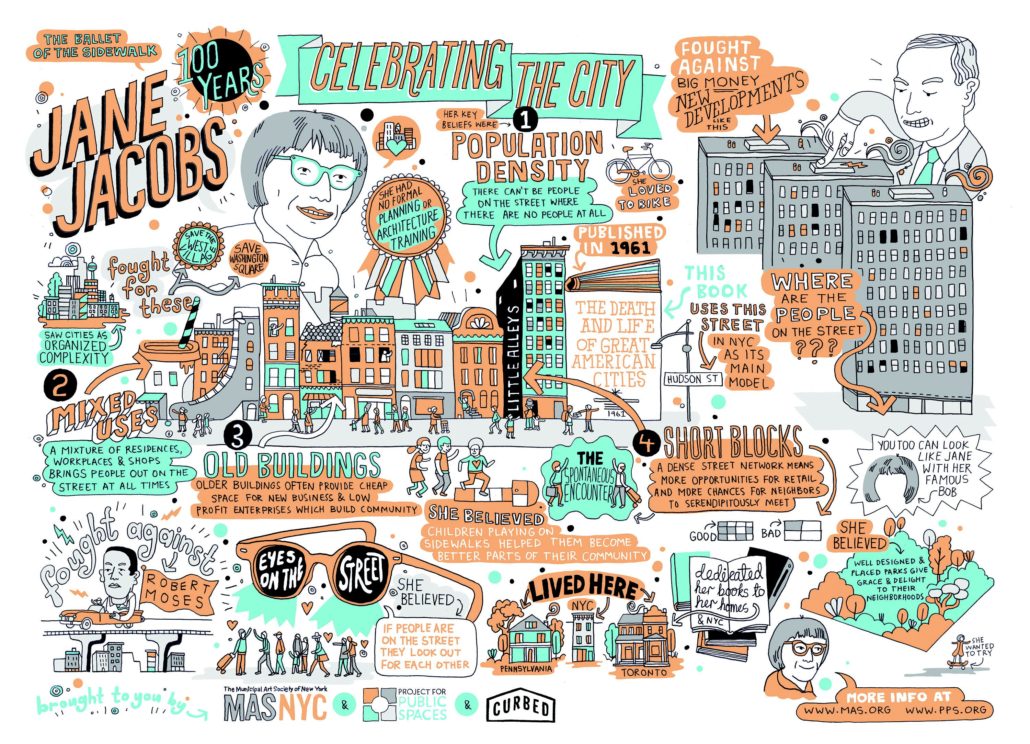 Here are some selected aspects of her central theories on the functioning of cities:

A firm believer in the importance of local residents having input on how their neighbourhoods develop, Jacobs encouraged people to familiarize themselves with the places where they live, work, and play with words like these:

“No one can find what will work for our cities by looking at … suburban garden cities, manipulating scale models, or inventing dream cities. You’ve got to get out and walk. Walk, and you will see that many of the assumptions on which the projects depend are visibly wrong. (…) The citizen can be the ultimate expert on this; what is needed is an observant eye, curiosity about people, and a willingness to walk.” — Jane Jacobs, Downtown is for People (Fortune Classic, 1958)

Jacobs’ wrote incisively and beautifully on the importance of dense and vibrant cityscapes, famously uncovering the ‘sidewalk ballet’, that intricate dance between neighbours and passersby that makes a street enjoyable and friendly.

“Under the seeming disorder of the old city, wherever the old city is working successfully, is a marvelous order for maintaining the safety of the streets and the freedom of the city. It is a complex order. Its essence is intricacy of sidewalk use, bringing with it a constant succession of eyes. This order is all composed of movement and change, and although it is life, not art, we may fancifully call it the art form of the city and liken it to the dance — not to a simple-minded precision dance with everyone kicking up at the same time, twirling in unison and bowing off en masse, but to an intricate ballet in which the individual dancers and ensembles all have distinctive parts which miraculously reinforce each other and compose an orderly whole. The ballet of the good city sidewalk never repeats itself from place to place, and in any one place is always replete with new improvisations.”  — Jane Jacobs, The Death and Life of Great American Cities

Jane’s Walk was founded in Toronto in 2006 by a group of Jane Jacobs’ friends and colleagues as a way to honour and activate her ideas. That first year, there were a handful of walks in Toronto. Over the next decade, the movement saw rapid global uptake by urban activists around the world. Since 2014, Vienna is also part of the global Jane’s Walk movement. In 2017, 1,700 Jane’s Walks took place in 225 cities around the world, spanning 37 countries and 6 continents. The movement continues to grow every year!

Past and Future Events

No walks planned at this time.